World Surfing League Qualifying Series 3000, also referred to as So Sri Lanka Pro 2019 is all set to be staged at the World class point break of Arugam Bay from September 25th to 29th of this month, with the participation of over 122 surfers from 24 nations. The Sri Lanka Tourism Promotion Bureau announced that surfing event has been extremely well received by professional surfers from around the world while many have expressed their keen interest to participate and witness the qualifying rounds in Sri Lanka. Mr. Steve Robertson, Regional Manager Asia & Global VNR Producer, World Surf League (WSL), remarked, ‘’ We are here to deliver positive stories about Sri Lanka to the world. This is all about a magnificent surfing event and a global promotion about Sri Lanka. All Sri Lankan media is encouraged to engage with World Surf League. We want to work with the domestic media as well. It’s been a great journey, and we are looking forward to the event. We want to bring out a superb event, where everyone is a winner, and we want to keep coming back here, and just to reiterate of how great Sri Lanka is as a destination’. “It will be so amazing to have the WSL come back to Sri Lanka,” said Sri Lankan Surfing Federation President Hiran Ukwatte. “We can’t wait to witness a world-class event and watch the positive effect it will have on surf sports in our country and on surf tourism to the area. Arugam Bay is a world-class wave with some fantastic local surfers like D.A Lakshitha, Praneeth Sandaruwan, and Lesitha Prabath to name a few. these surfers are looking forward to the opportunity to compete with and surf with surfers from all around the world.” he expressed. 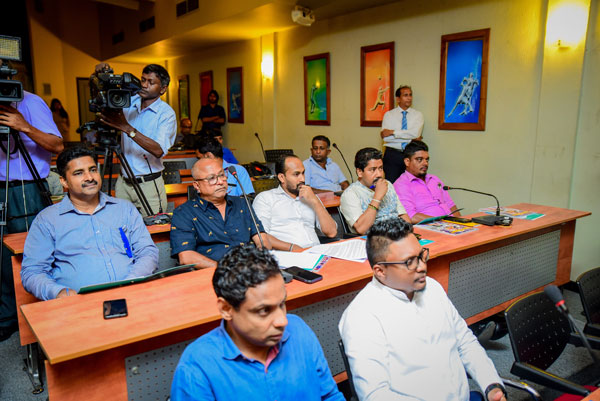 A part of the audience

Many of these surfers are very well known within the world professional surfing ranks and many are serious contenders to represent their nations in next years 2020 Japan Olympic Games, where surfing makes its Olympic debut.

One such surfer is the fast emerging Rio Waida from Indonesia. The powerful youngster placed 3rd in the WSL World Junior Championships in 2018 and he is already identified as future star of the sport. Questions from the Media

‘’I am very excited to be coming to Sri Lanka for this great event ‘’ said Waida. ‘’I’ve heard great things about the waves in Sri Lanka and it is always fantastic for us to have the opportunity to compete in quality surf –I can’t wait! ‘’

The So Sri Lanka Pro 2019 will also play as a huge opportunity for some of the local surfers to take on the international professionals as wildcards in the event. This opportunity is something that has been made possible through the WSL and the Surfing Federation of Sri Lanka. Chairman of Sri Lanka Tourism Promotion Bureau (SLTPB) Mr. Kishu Gomes remarked that the event will amplify Sri Lanka’s position as a major surfing and tourist destination. “Over 700 visitors are also expected to be present, in addition to the 122 surfers who would be in the country. The surfers and visitors are scheduled to spend at least 10 days in the surfing paradise of Arugam Bay.”